Being the Bowie fan that I am, I couldn’t resist a blog using the title of one of his albums. But, this is not a blog about the Dame. It’s a blog about a writer who is as essential to writing as Bowie is to music. Step forward Mr. George Orwell.

Best known for his novels ‘Animal Farm’, ‘The Road To Wigan Pier’ and, of course, the dystopian world of ‘Nineteen Eighty-Four’, Eric Arthur Blair, AKA George Orwell, was also a keen essayist, journalist and critic. 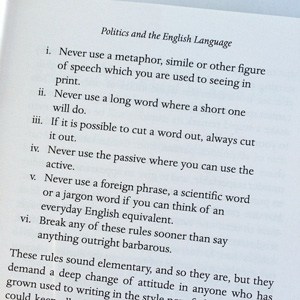 As a copywriter, one particular piece of Orwell’s’ work stands out, and that’s his 1945 essay ‘Politics and The English Language’. Sounds pretty dry and uninteresting that’s for sure. But it wasn’t until I learned that it was only 32 pages long that I thought I ought to get to grips with it. So, on a train from Exeter to London, I got stuck in and finished it off somewhere south of Bristol.

What’s it all about?

It’s an essay on the importance of clear and precise language. Orwell spells out that people in power – politicians and the like – usually use confusing and unclear language to baffle the general public. While this is true – and definitely remains so today – to overcome this, Orwell created a list of 6 ‘rules’ he believed all writers should stick to.

1. Never use a metaphor, simile or other figure of speech which you are used to seeing in print.
2. Never use a long word where a short one will do.
3. If it is possible to cut a word out, always cut it out.
4. Never use the passive where you can use the active.
5. Never use a foreign phrase, a scientific word or a jargon word if you can think of an everyday English equivalent.
6. Break any of these rules sooner than say anything outright barbarous

Obviously, this isn’t an extensive or exhaustive guide to writing well. But these six rules can stand any writer in good stead, whatever the subject. For a copywriter, they’re certainly just as relevant now as they were 70 years ago and proves that, indeed, nothing has changed.

“Language is a political issue, and slovenly use of language and cliches make it easier for those in power to deliberately use misleading language to hide unpleasant political facts.” – George Orwell

When you’re in need of some clear, concise and jargon-free copy, get in touch and let’s get started!