Skydiving, Or The Man Who Fell To Earth

Anyone who has done it or knows anything about skydiving will tell you, repeatedly, that you HAVE to do it. It’s something you NEED to do. It will be the best thing you’ll EVER do. It’s an experience of a LIFETIME. Not normally one to fall for such platitudes, how did this endeavour come about in the first place? And more importantly, what the hell was I thinking??! 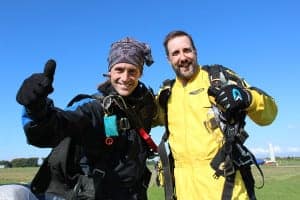 If at first you don’t succeed…

After a comment from me about ‘fancying a go at skydiving’, I opened an envelope on my birthday containing a gift voucher from my Wife for just that. Once the colour came back to my ashen face, I was quite excited about it. Being, ahem, over 40, I had to get a Doctor’s Certificate to confirm I, basically, wouldn’t die on them. Oh, the ignominy.

Certificate obtained, I contacted Skydive.buzz and made the booking for a tandem skydive on August 31st at 2.00pm. I managed to put the fear out of my mind for a couple of weeks until the day arrived and then, there it was – Summer Bank Holiday. Bang on cue, skies as black as thunder and low, heavy cloud. They pretty much killed off any chance of skydiving. Well, it was August after all. 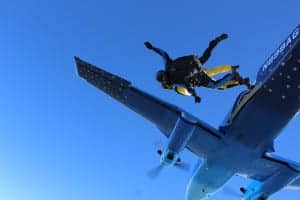 Rescheduled for a month’s time, again I pretty much forgot about it, until the new date rolled around. This time, jump day – September 27th – arrived on the last day of an unexpected sun-fest over these parts. Clear blue skies meant this shit just got real! It’s happening.

After what seemed like an eternity just hanging around and waiting, left with your own thoughts about how you’re actually going to cope with 3 miles of nothing between you and the earth, I was called with 10 others to go through our instructions to find out exactly what we needed to do and what we absolutely shouldn’t do!

It was all pretty lighthearted because, in a nutshell, as long as you cross your arms over your chest when you’re flung out and pick your legs up when you land, there isn’t much you actually need to do. Your tandem skydive buddy (in my case, Ryan who has nearly 7,500 – that’s seven and a half THOUSAND – jumps under his belt) does it all for you.

Decked out in my fetching yellow jumpsuit, up we went in a very noisy and fast Beech 99 plane, rising up to an altitude of 15,000ft (the highest you can go without oxygen). Nine minutes was all it took to take in the 360° views of the whole of Devon whilst having various straps and harnesses secured. Before I knew it, Ben, my photographer, leapt out of sight, swiftly followed by me and Ryan.

Don’t look down! Actually, do.

When faced with a drop of 15,000ft, you just want to look down and take it all in. But this is the time when you actually need to remember what they told you – arched back, arms crossed, head back, and GO! You’re out. You roll almost immediately, so your first view is the blue sky and the underside of the plane above you. As you roll back around, you see the most fantastic view you’ll probably ever see. You actually forget you’re free-falling at a speed of 120mph – there’s just too much to take in. It’s like going on a ride at a theme park – safely strapped in, with the air rushing into you. A couple of taps on the shoulder and it’s time to pull the classic skydiving pose and really start to enjoy it.

Ben somehow appeared near us, taking some pretty impressive shots of Ryan and a bemused looking me, desperately trying to get my head around what was actually happening. Insane. After a minute, the ‘chute was released and we floated down to earth over the next four minutes. 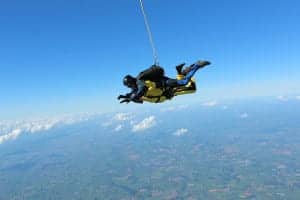 Google Maps, eat your heart out

With such amazing views of Devon (I was really lucky with the weather) to take in all around me – it was like being in my own version of Google Maps. I looked up and behind me to see the rest of my crew following on. It’s at that point where it hits you and all the adrenaline and sheer insanity of what you’ve just done envelops you in a wave of euphoria.

It’s a nice touch being allowed to steer the parachute (do you actually ‘steer’ a parachute?) for a bit, yanking down on one side to spin round for another 360° view. Lifting up to get more speed, then twisting again (that bit did feel like being on a theme park ride). Even when coming into land, it still all looked so far away. But before you know it, you’re raising your legs up and skidding across the grass like a grinning fool. 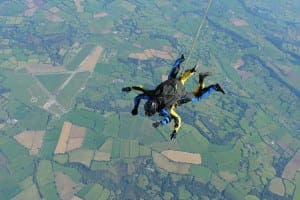 I told you so

Back on terra firma and one large V&T later, it dawned on me that those people who got carried away talking about the virtues of throwing yourself out of a plane at altitude were, completely and unequivocally correct. Indeed, I would urge anyone who hasn’t done it, to get a skydive booked at their earliest convenience. I’d do it again in a heartbeat.

What better way to prove you’re alive than by hurtling towards the earth at speed?